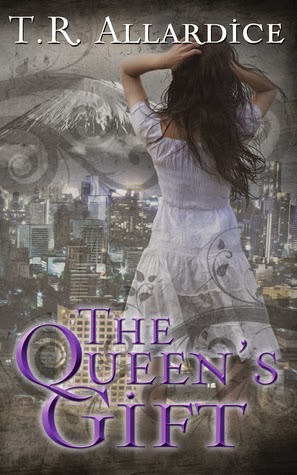 Fifteen-year-old, late-bloomer Jean Elliott dreams of becoming a Genie like her mom. When her family relocates to Tokyo, Jean is forced to use sleight-of-hand tricks to fool everyone at school into believing that she’s a normal Preternatural or risk expulsion. When her power finally appears, it comes in the form of the Queen’s Gift–an unspeakable magic that strips power from all Preternaturals and heralds the arrival of the new queen.

After an absence of two hundred years, not everyone wants the monarchy to return and they’re willing to go to great lengths to keep the status quo. When buried secrets rip Jean’s family apart, she has a choice to make: Walk away and hope for the best or embrace the power that’s known to lead to madness in order to save her family.

Jean’s greatest dream has turned into her biggest nightmare and no matter how hard she tries, there’ll be no wishing the Queen’s Gift away. (Goodreads)

T.R. Allardice writes young adult, new adult, and humorous horror stories. Most of what she writes incorporates several genres. The content won’t always be ‘safe’. What’s the fun in that? She is a member of the Horror Writer’s Association, Novelist Inc. and the Author’s Guild. She has thirty-one books published under another pen name. To find out more about her upcoming work, go to her site!
Author Links: Website || Facebook || Twitter

1. How did you come up with the idea for The Queen’s Gift?
I actually came up with the idea after a trip to Tokyo, Japan. I felt so out of my depth there, yet utterly fascinated by the culture. I wondered what would happen if you sent a teenager there and she had to deal with school plus the cultural divide. Throw in some magic—or lack thereof, and you have a lot of potential conflict.

2. How many books will be in the series?
Right now, I have two more books planned, but honestly, it depends on what it takes to tell the story. I’d always planned for it to be a trilogy, but I knew there could possibly be four books in the series.

3. Are you working on any other books?
Yes, I’m currently working on two more young adult books that will be the start of two more series. They have boy lead characters and contain an ensemble cast much like The Queen’s Gift. One is set in Scotland and the other is in New York.

4. How do you pick the settings?
I tend to go with places I’ve been to so that I have a real feel for the location. Most of the time, I’m traveling someplace and suddenly a story idea comes to me. That’s what happened when I was in London last year. The story that came to me there is currently stewing in my subconscious.

5. Who are your favorite Young Adult authors?
There are so many great young adult authors out there. It’s going to be hard to name them all. Off the top of my head (and I know I’ll be forgetting some), my favorites are: Melissa Marr, J.A. Templeton, Holly Black, Tawny Stokes, Neil Gaiman, Rachel Caine, Richelle Mead, Rick Riordan, J.K. Rowling, Maggie Stiefvater, Rachel Vincent, and Jennifer Armentrout.

6. Which Winchester brother would you pick?
Dean, but I do love Sam’s dimples. LOL!

7. If you could be any character, who would you be?
Probably Superman, but I am tempted by Iron Man and Spiderman.

8. What do you do when you’re not writing?
I try to spend time with real people, though it doesn’t always work. Characters can be very demanding. 😉

9. If you weren’t a writer, what would you do?
I’d probably go back to school and finish my degree. Not sure what kind of job I could get with a mythology degree though.

10. Last question. If you could have lunch with any writer, who would it be?
That’s easy. J.K. Rowling. Hands down. Thank you for having me.

Now for the giveaway. One winner will win an e-book copy of The Queen’s Gift. All you have to do? Leave a meaningful comment and a way to contact you (email). Winner will be chosen on February 11th 2015