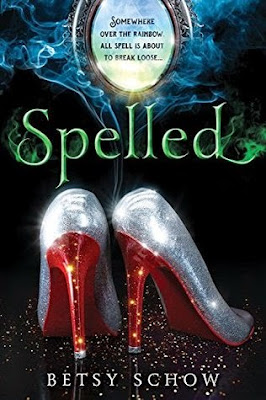 Fairy Tale Survival Rule #32: If you find yourself at the mercy of a wicked witch, sing a romantic ballad and wait for your Prince Charming to save the day.

Yeah, no thanks. Dorthea is completely princed out. Sure being the crown princess of Emerald has its perks—like Glenda Original ball gowns and Hans Christian Louboutin heels. But a forced marriage to the brooding prince Kato is so not what Dorthea had in mind for her enchanted future.

Talk about unhappily ever after.

Trying to fix her prince problem by wishing on a (cursed) star royally backfires, leaving the kingdom in chaos and her parents stuck in some place called “Kansas.” Now it’s up to Dorthea and her pixed off prince to find the mysterious Wizard of Oz and undo the curse…before it releases the wickedest witch of all and spells The End for the world of Story.
(Goodreads)

Advance Praise for Spelled
“A cute adventure with romance set in a world full of fairy-tale mash-ups. Readers will love Dorthea’s evolution from spoiled princess to strong, confident heroine… For Oz fans, this work is a great clean-read alternative to Danielle Paige’s Dorothy Must Die.” –School Library Journal
“This wickedly funny, fast-paced adventure has it all: brains, courage, and heart. (Plus a kickin’ pair of heels.) .” –Jen Calonita, author of The Secrets of My Hollywood Life and Fairy Tale Reform Schoolseries
“Fairy tale survival rule #1, do NOT read this book late at night. You will wake up your entire family with loud laughter. Fairy tale survival rule #2, if you love the Wizard of Oz, clever fairy tale mash-ups, and enough twists and turns to keep you guessing what will happen until the very end, you MUST read Spelled.” –J Scott Savage, award winning author of Farworld, Case File 13, and the Mysteries of Coveseries.
“A hilarious and snarky reimagining of the world of Oz, along with many other fairy tales injected throughout, “Spelled” is one fabulous read…Kick off those silver slippers and tuck in with this wonderful tale!” —Senator Sipes, Lil Book Bug (Palmdale, CA)
EXCERPT
Most of the crowd had dispersed. The final few stragglers looked at me with the all­too-common look of fear mixed with trepidation. Pix ’em. They were just servants. It wasn’t like their opinion mattered.
Only one remained, watching me with open curiosity. He looked to be in his late teens or was magically enhanced to appear so. He could have been a hundred for all I knew. I’d never seen him before in my life. He was handsome enough, for a commoner, even in his worn leather pants and cracked work boots. A foreigner, his hair was unruly and dark auburn, which complemented his tanned but dirt-smudged complexion, though the tall, dark stranger vibe was ruined by his piercing pale blue eyes.
Well, I’d had enough of being a sideshow for the day. “If you’re the new gardener, the hedges are overgrown and in need of a trim.” I pointed in the direction of my father. “While you’re there, you can help the king with the wisps.”
The young man’s expression clouded over, but he didn’t move.
I stamped my foot and pointed more forcefully. “Off with you. Courtyard’s that way. Be sure to clean those awful boots before coming back in.”
“Someone told me I’d find a princess of great worth here. One with the strength to be the hero this realm needs.” He stared at me with those unsettling blue eyes. They were cold, like ice water—made me shiver from head to toe. Then his gaze seemed to search even deeper. Finally, he looked through me, like I was nothing.
In brisk steps, he strode across the marble to the courtyard. But before crossing the threshold, he turned back to glare at me with his lip curled ever so slightly. “It seems she was mistaken.”
Just like that, I had been sifted, weighed, and found wanting.
I felt my own lip curl in response. How rude! Who the Grimm was this peasant to judge me? I was wearing a Glenda original. Original! Not some fairy-godmother knockoff worn by those servant girls turned royal. I was a crown princess, for the love of fairy, and no one dismissed me.
Before I could put the boy in his place—down in the dirt, where he belonged—a clatter came from behind, making me nearly jump out of my shoes. I checked and was relieved that Sterling had simply dropped his sword. By the time I looked back, the gardener was gone.
After stowing his blade, Sterling held up his shield, not in defense of the entrance but so he could look at his reflection. “Clearly he’s blind and doesn’t know what he’s talking about.”
I didn’t ask for Sterling’s opinion, but it made me feel better.
Until he opened his mouth again.
“Worth, pffft. I mean, look around at all the jewels. Your palace has everything you could ever want. Honestly, I don’t know what you’re fussing about. Why would anyone want to leave?”
Because a cage is still a cage, no matter how big or glittering the bars are.
And I would find a way free, no matter the cost.

BETSY SCHOW is the TODAY Show featured author of the non-fiction book, Finished Being Fat; however she’s been mixing up real life and fantasy for as long as she can remember.   If someone were to ask about her rundown truck, she’s 100% positive that mechanical gremlins muck up her engine. And the only reason her house is dirty is because the dust bunnies have gone on strike.  She lives in Utah with her own knight in geeky armor and their two princesses (that can totally shapeshift into little beasts). When not writing, she acts as the Tournament Director for Odyssey of the Mind and helps teach kids creative thinking (or how to turn their toasters into robots).
Her debut novel, Spelled, comes out June 2015 from Sourcebooks. She is represented by Michelle Witte, Mansion Street Literary Agency.
Website || Twitter