So, I’m going to do this new thing monthly where I let you guys know a little bit more about me. I used to do this over on Bookish Lifestyle. But since I’m not there anymore, I decided to bring over a version of the Bookish Digest over here. I’ll let you know what my favorite read was for the month and I’ll link up some of my posts from the month as well as give you guys some news or information about my life.
My pick for the month of July: 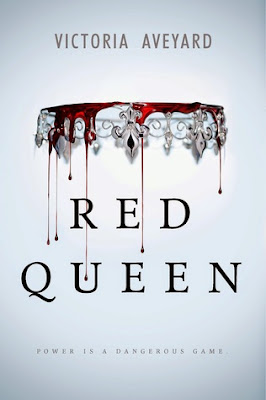 Mare Barrow’s world is divided by blood—those with red and those with silver. Mare and her family are lowly Reds, destined to serve the Silver elite whose supernatural abilities make them nearly gods. Mare steals what she can to help her family survive, but when her best friend is conscripted into the army she gambles everything to win his freedom. A twist of fate leads her to the royal palace itself, where, in front of the king and all his nobles, she discovers a power of her own—an ability she didn’t know she had. Except…her blood is Red.

To hide this impossibility, the king forces her into the role of a lost Silver princess and betrothes her to one of his own sons. As Mare is drawn further into the Silver world, she risks her new position to aid the Scarlet Guard—the leaders of a Red rebellion. Her actions put into motion a deadly and violent dance, pitting prince against prince—and Mare against her own heart.

From debut author Victoria Aveyard comes a lush, vivid fantasy series where loyalty and desire can tear you apart and the only certainty is betrayal.
(Goodreads)

My Posts:
Reviews:
Jesse’s Girl by Miranda Kenneally   4/5
City of Bones by Cassandra Clare    4/5
Sleeping Freshmen Never Lie by David Lubar    4/5
Grave Mercy by Robin LaFevers    2/5
Memes:
Top Ten Hyped Books I’ve Never Read
Last Ten Books That Came Into My Possession
Top Ten Books That Celebrate Diversity/Diverse Characters
Top Ten Characters Who Are Fellow Book Nerds
WoW #25
WoW #26
WoW #27
Other Posts:
Writing Update #2
Writing Update: Writer’s Life Tag
Truthwitch Giveaway (OPEN UNTIL OCTOBER)
SIW: August Deets and July Link Up
What Books to Read During Bout of Books
ARC August Sign Up Post
What happened in July:
1. Joe surprised me with a day out in the city! He took me to an amazing burger joint (Kuma’s Corner, MUST NEED to go if you ever visit Chicago). He also took me to see the Blue Man Group and afterwards we went up to the Sears Tower on the Skydeck. It was wonderful.

2. My cousin got hitched! It was a gorgeous day for it and she was even more gorgeous! I am so happy for her!

3. Sophie went swimming for the first time! We took our husky, Sophie, to the 4th of July party we went to and it was super hot out that day so we let Sophie go swimming in the pool with us and she LOVED it! It was adorable!

What Books I Read In July:

1. Jesse’s Girl by Miranda Kenneally
2. Unbreakable by Kami Garcia
3. The Edge of Never by J.A. Redmerski

7. The Distance Between Us by Kasie West