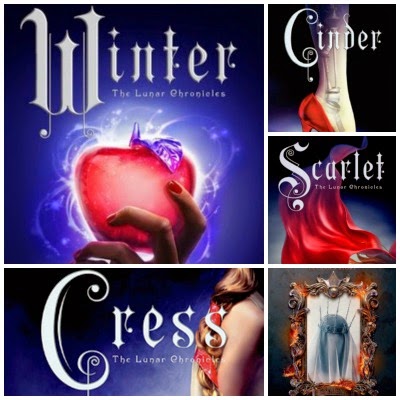 Hello, Darlings!
So, for those of you who aren’t familiar with this series (LE GASP) The Lunar Chronicles is basically a series of intertwined fairy tale retellings in space. Sound amazing? IT IS, NOW GO READ IT. When I initially read the first book in the series, it had just come out. I thought it was good, but nothing totally amazing. So I waited until Winter was almost out before I finally picked up Scarlet. And boy am I happy that I did!!!! This series is one of THE best retellings that I have ever read. I was talking to one of my friends about the series, and we started to narrow down what exactly it makes a good retelling. Because essentially ever story that we read today is a “retelling” of something else. So, we narrowed it down to the top two most essential aspects of a retelling:

Now, for starters, we have to examine what the book is retelling. Is it a common fairy tale (ex: Cinderella, Beauty and the Beast, etc) or is it something less immediately recognizable (ex: a fable, or Chinese Folklore, etc.) I personally feel like you have to give the most kudos to an author who does a retelling of a story that is already VERY redone. *cough* Cinderella *cough* Particularly because when you take a story that someone else has already redone over and over it becomes harder and harder to distinguish your story from someone else. If you can find a way to take a story people already know and love, and THEN make it your own: I say: round of applause. If you’re an author doing a retelling of something that isn’t already well known then I personally think you have a LOT more opportunity to really change things up.

How Close they stick to Canon

This is my personal favorite element of retellings. Some authors simply change the setting, others completely change the world. The Lunar Chronicles is pretty much its own story entirely, only basic elements can be pinpointed back to canon. It becomes a challenge for the reader to figure out where elements of the origin story are going to peak through. An author’s story telling skill can really shine through when you got lost in their world, and can’t even distinguish what they used as inspiration anymore.

So, what do you think?

What’s your favorite contemporary retelling?? Do you think there is another more important aspect than what I listed above? Let me know down in the comments or find me on Twitter @nerddelizzie 🙂