Paperback features over fifty pages of bonus materials, including a sneak peek of Insurgent, an author Q&A, a discussion guide, a Divergent playlist, faction manifestos, and more!
In Beatrice Prior's dystopian Chicago world, society is divided into five factions, each dedicated to the cultivation of a particular virtue—Candor (the honest), Abnegation (the selfless), Dauntless (the brave), Amity (the peaceful), and Erudite (the intelligent). On an appointed day of every year, all sixteen-year-olds must select the faction to which they will devote the rest of their lives. For Beatrice, the decision is between staying with her family and being who she really is—she can't have both. So she makes a choice that surprises everyone, including herself.
During the highly competitive initiation that follows, Beatrice renames herself Tris and struggles alongside her fellow initiates to live out the choice they have made. Together they must undergo extreme physical tests of endurance and intense psychological simulations, some with devastating consequences. As initiation transforms them all, Tris must determine who her friends really are—and where, exactly, a romance with a sometimes fascinating, sometimes exasperating boy fits into the life she's chosen. But Tris also has a secret, one she's kept hidden from everyone because she's been warned it can mean death. And as she discovers unrest and growing conflict that threaten to unravel her seemingly perfect society, she also learns that her secret might help her save those she loves . . . or it might destroy her.
Veronica Roth is the New York Times bestselling author of Divergent, the first in a trilogy of dystopian thrillers filled with electrifying decisions, heartbreaking betrayals, stunning consequences, and unexpected romance.

My Thoughts:
So, I have decided that I absolutely love this new Reader’s Choice challenge that I am doing because I don’t know when I would have picked up this book without having this challenge. I love this series and I just bought Insurgent on my Kindle so that I can pick up where it left off and get ready for Allegiant to be out in October.
Thank you so much to all of you because you made me read this earlier than I ever would have. I love dystopian novels and Divergent definitely did not disappoint! The writing was fluid and consistent but it’s the characters and the world that really tugged on my heart and made me love this book.
I’ll start off with Tris. First of all, how awesome is that name? Love it! Anyways, Tris is the main character within this series and what a wonderful main character she is. She’s selfless, kind, brave, courageous, loving, smart, strong, and so many others. I could really relate to her while at the same time live through her, because let’s face it, half the crazy shit she does I will never be caught dead doing! Jumping on and off moving trains, jumping off rooftops, climbing the Ferris Wheel that is at Navy Pier, YEA RIGHT!? That Ferris Wheel is super tall. Not to mention the time she zip-lined off of the Hancock building. HAH. But, I truly loved Tris and I could really feel like I was in her shoes.
Four, oh Four… You have made my list of Book Boyfriend’s for SURE! He’s so dreamy. He’s tattooed, witty, strong, clever, protective, smart, and oh so dreamy. I really enjoyed Four. At times I wanted to smack Tris because she was emotional about some of the situations and I was just like, “Tris, come on, not in front of those people! You’re being an idiot! Four is trying to protect you!” But then I got over it. But I cannot wait to get more Four action!!
The other characters like Christina, Will, Tris’s mom and dad, Caleb, and Uriah I also enjoyed. I heard some people say they didn’t like Christina but I did. I think she is exactly what Tris needed. And the world building was amazing. It was so easy for me to picture coming from Chicago myself. I loved the fact that it was set in Chicago! I don’t think that there are enough books or ANYTHING really that are set in Chicago. There needs to be MORE!
All-in-all, Divergent was a magnificent masterpiece and I am willing to bet that Insurgent won’t be far off either. I cannot wait to dive back into Tris’ shoes and go jumping from building to building since I won’t do that in my real life! Definitely go pick up Divergent if you like dystopian novels or the city of Chicago :]

We believe in ordinary acts of bravery, in the courage that drives one person to stand up for another.

Becoming fearless isn’t the point. That’s impossible. It’s learning how to control your fear, and how to be free from it.

‘Peter would probably throw a party if I stopped breathing.’
‘Well,’ he says, ‘I would only go if there was cake.’

“I have something I need to tell you,” he says. I run my fingers along the tendons in his hands and look back at him. ‘I might be in love with you.” He smiles a little. “I’m waiting until I’m sure to tell you, though.”
“That’s sensible of you,” I say, smiling too. “We should find some paper so you can make a list or a chart or something.”
I feel his laughter against my side, his nose sliding along my jaw, his lips pressing my ear.
“Maybe I’m already sure,” he says, “and I just don’t want to frighten you.”
I laugh a little. “Then you should know better.”
“Fine,” he says. “Then I love you.”


Fear doesn’t shut you down; it wakes you up. I’ve seen it. It’s fascinating.” He releases me but doesn’t pull away, his hand grazing my jaw, my neck. “Sometimes I just want to see it again. Want to see you awake. 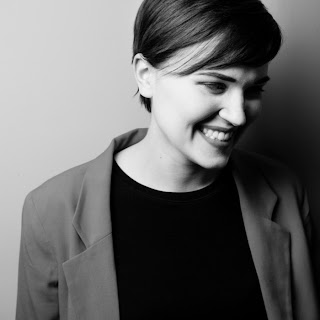 About the Author: (From her goodreads)
Veronica Roth is from a Chicago suburb. She studied creative writing at Northwestern University, and wrote DIVERGENT (Katherine Tegen Books, May 2011) and INSURGENT (May 2012). The third and final book in The Divergent Trilogy, ALLEGIANT, will come out on October 22, 2013. In the meantime she will spend endless hours browsing Wikipedia in her pajamas as she eats corn flakes. (Or some other kind of bland breakfast cereal.)
Author Links:
Goodreads || Blog || Twitter

My Thoughts: MG Bras and Broomsticks by Sarah Mlynowski

The Girl At Midnight [Review]

Review: A Study in Charlotte by Brittany Cavallaro