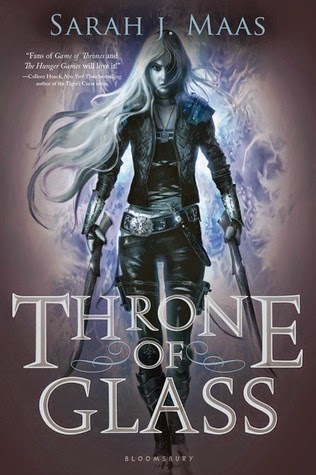 Title: Throne of Glass
Author: Sarah J. Maas
Read Along Hosted By: Bookish Book Blog
Series: Throne of Glass #1
Published: August 2, 2012 by Bloomsbury
My review will be on 2-5-15

In a land without magic, where the king rules with an iron hand, an assassin is summoned to the castle. She comes not to kill the king, but to win her freedom. If she defeats twenty-three killers, thieves, and warriors in a competition, she is released from prison to serve as the king’s champion. Her name is Celaena Sardothien.
The Crown Prince will provoke her. The Captain of the Guard will protect her. But something evil dwells in the castle of glass–and it’s there to kill. When her competitors start dying one by one, Celaena’s fight for freedom becomes a fight for survival, and a desperate quest to root out the evil before it destroys her world.

DISCUSSION Q&A: (from Bookish)
1) Celaena receives help from many sources throughout the novel. Of all these character, who do you think helped her the most? What does he/she do or teach Celaena that further develops her as a character?
I would have to say either Nehemia or Elena. There were both helpful and they both influenced Celaena.

2) Who do you think is Celaena was before Arobynn found her?
This one’s tough. I really don’t know. But I wouldn’t mind knowing more about her past and what she was like.

3) Are there any aspects of Throne of Glass that you wished Sarah had gone into more detail about?
Maybe more about Celaena’s past. Maybe more into the magic that is within Celaena (I WANT TO KNOW MORE ABOUT THE BLUE WYRDMARK!!!)

4) What are your thoughts about the kinda love-triangle? Are you favoring Dorian, Chaol, or is it too soon to tell where you loyalty lies?
I don’t mind love triangles because I like picking teams. And the first half of the book I was all about Chaol. Now? I HAVE NO IDEA!! I want them both. I don’t know!!!! :/

5) What do you think of Nox now? Do you think he’ll come back into play later? And are you hoping for it? (Andrea’s Note: I AM!)
LOVE HIM! And I am totally hoping comes back into the story!

6) Who’s your favorite character so far? Do you imagine this could change throughout the series?
Hmm I know Celaena is my favorite. But as a second favorite I think I’m going to go with… Nehemia. I just have a huge soft spot for her and I think she’s a great friend to Celaena.

7) How surprised were you by who was behind the Champion murders? Did you guess before it was revealed?
I had a feeling not long after the first half of the book that it was either the Duke or Cain. But I still liked my idea of Dorian being the killer or hiring a hitman. But then when it got to being about the evil creatures I was glad it wasn’t Dorian.

8) What do you think of Nehemia NOW? And her friendship with Celaena?
I liked her before and I like her even more now!

10) Do you have any predictions as to what may happen next? (If you’ve already read the next book/s, you should probably sit this question out.)
I have no idea. I don’t even know what to think. All I know is that I want more! So, I plan on reading the next installments ASAP!!!

And I don’t think this needs to be said, but just in case. If you have read Crown of Midnight or Heir of Fire, please do not spoil those books for the rest of us. Allow us to remain ignorant and experience the magic for ourselves  🙂 Join in on all the fun and sign up by clicking this button!