So, I’m going to do this new thing monthly where I let you guys know a little bit more about me. I used to do this over on Bookish. But since I’m not there anymore, I decided to bring over a version of the Bookish Digest over here. I’ll let you know what my favorite read was for the month and I’ll link up some of my posts from the month as well as give you guys some news or information about my life. (I’ll usually do this at the end of each month but I didn’t have time last week)
My pick for the month of January: 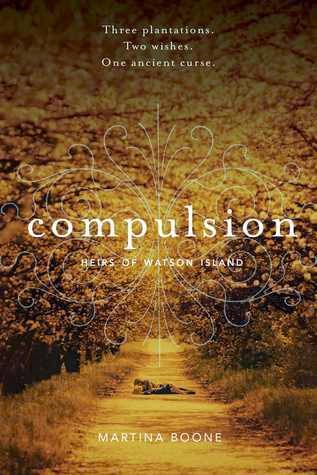 Three plantations. Two wishes. One ancient curse.
All her life, Barrie Watson has been a virtual prisoner in the house where she lives with her shut-in mother. When her mother dies, Barrie promises to put some mileage on her stiletto heels. But she finds a new kind of prison at her aunt’s South Carolina plantation instead–a prison guarded by an ancient spirit who long ago cursed one of the three founding families of Watson Island and gave the others magical gifts that became compulsions.
Stuck with the ghosts of a generations-old feud and hunted by forces she cannot see, Barrie must find a way to break free of the family legacy. With the help of sun-kissed Eight Beaufort, who knows what Barrie wants before she knows herself, the last Watson heir starts to unravel her family’s twisted secrets. What she finds is dangerous: a love she never expected, a river that turns to fire at midnight, a gorgeous cousin who isn’t what she seems, and very real enemies who want both Eight and Barrie dead.

My Posts:
Reviews:
The Evolution of Mara Dyer by Michelle Hodkin 5/5
To All The Boys I’ve Loved Before by Jenny Han 4/5
Compulsion by Martina Boone 5/5
Memes:
Top Ten Tuesday #26
Top Ten Tuesday #27
Top Ten Tuesday #28
Top Ten Tuesday #29
WoW #2
WoW #3
Other Posts:
Throne of Glass Read Along #1
Throne of Glass Read Along #2
Reader’s Choice/TBR Jar #2
What happened in January:
1. New blog design by Evie at Bookish!
2. Finally got back into blogging full time!
3. My bridesmaid dress finally came in!
What I’m looking forward to for February:
1. 50 Shades of Grey comes out!! Super stoked to go see it!!
2. Getting a new couch either this month or next month.
3. Getting my tax money back!
Let’s talk about it. What were some of your favorite reads this month? Did you read any of these books? What are you looking forward to next month? Leave your thoughts in the comments! 🙂