A loan shark that doesn't bite?
Rachel Beaumont discovers her mother's gambling debt has put their family in danger of losing their money and social status. It's up to Rachel to do anything to maintain the lifestyle she's accustomed to--including hunting down her mother's debtor. But the green-eyed, dark-haired, hunk knownas Rex Greene matches none of the stereotypes of a loan shark. Her spur-of-the-moment plan to make him fall in love with her is a dangerous roll of the dice.
FBI agent Colton McCabe arrived at Callaway Cove with one motive. Play the part of Rex Greene and gather evidence in the Beaumont racketeeringcase. He never anticipated the involvement of the subject's beautiful daughter, Rachel. Not only is she unexpected in every way, but she may just be the one to crack the case. Or his heart.
In this second installment of the Callaway Cove series, WHILE IT LASTS delivers a sweet romance, filled with joy, heartbreak, love, and choices. 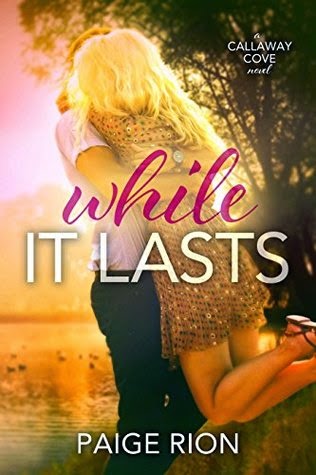 A loan shark that doesn’t bite?

Rachel Beaumont discovers her mother’s gambling debt has put their family in danger of losing their money and social status. It’s up to Rachel to do anything to maintain the lifestyle she’s accustomed to—including hunting down her mother’s debtor. But the green-eyed, dark-haired, hunk known as Rex Greene matches none of the stereotypes of a loan shark. Her spur-of-the-moment plan to make him fall in love with her is a dangerous roll of the dice.

FBI agent Colton McCabe arrived at Callaway Cove with one motive. Play the part of Rex Greene and gather evidence in the Beaumont racketeering case. He never anticipated the involvement of the subject’s beautiful daughter, Rachel. Not only is she unexpected in every way, but she may just be the one to crack the case. Or his heart.
(Goodreads)

This was a wonderful sequel to Written On Her Heart. Paige Rion knows how to do it! And by do it, I mean she knows how to write. She is great with characters, plot, scene, love. I really enjoy reading the words Paige puts on the page.

This book left me liking Rachel. In the first Callaway Cove book, I hated Rachel. I thought she was a snobby bitch. In this book, I really liked her. I understood why she did what she did in the first book. I liked getting to know her and going through the familial problems with her. When her and Andi first talk in the book, my heart felt for Rachel, which was such a weird feeling. Because in the first book I was screaming ‘Rachel, you’re a bitch! How could you do that to your friend?!’ But when in Rachel’s head, I felt for her. Way to go, Paige for making that accomplishment!

Rex, or should I say Colton. Mmm, he’s dreamy. He has this confidence about himself that is just so yummy. When he takes Rachel to a wine tasting he has this whole elaborate talk about how it is up to Rachel on how many tasting trays there should be. If she chose one that means that there was a probable kiss at the end of the date. If she chose two then she probably doesn’t kiss on the first date. And the whole time I’m just thinking to myself, ‘Smooth move.’ I loved it.

“And now that I’ve laid out these assessments, if she chooses to share, I must only assume that I am definitely being rewarded with a kiss at the end of the night. So…” he said, turning his attention back to Rachel. “Which is it?”

I think that Paige did an amazing job on this second installment. And it was so cool getting the perspective of Rachel and learning to love Rachel. If you’ve read the first one, this second one is a must read. If you haven’t read the first one, do it! And then read this one! It’s a sweet contemporary romance. And I am awaiting the third book!

1. Where did you get the idea for The Callaway Cove series?

I was visiting Geneve-on-the-Lake, Ohio. It’s a small town off Lake Erie, and I just really loved the area. There were all these super old strip buildings with little shops and eateries. The area now is a bit rundown but it’s still fun and teaming with life June through August, and you can imagine what the area was once like when it was a booming tourist area. I thought it would be a really cool setting for a novel. But I wanted that once booming town, so I created the fictitious town of Callaway Cove, also on Lake Erie, and made it home to a story about three friends. I wanted to showcase more than romance in the Callaway series. I wanted to portray the dynamics of friendships, both good and bad.

2. Out of all of your characters, who do you feel you relate to the most?

This is a hard question because in a lot of ways, I think I’m a bit of all my characters, with the exception of Rachel. I’m not sure I’m as ruthless as she was in WOHH. And if there’s one thing I’m not, it’s selfish. However, if I had to choose one character, I suppose it would be Andi. I share her aspirations and her dreams. I’m every bit as motivated as she was to become a successful writer, and I too, realize that success sometimes comes at a cost.

3. What are some of your favorite tactics for writing? // What is your writing process?

Lots of coffee! Seriously. I almost always have to have coffee on hand the first thirty minutes while I write. I drink about half a pot a day. After the first couple cups though, I’m in the zone and nothing else outside my little world on the computer screen exists. I’m a self-proclaimed plotter that’s a pantser. Lol. I try to plot out my books, and I do to an extent, but can never quite get my stories that organized before I start writing them. I need my characters to come alive first. Other than that, I don’t have much of a process. I pretty much plop down on the couch with my laptop and go!

4. What’s the story on how you fell in love with writing?

Honestly, I think I fell in love with writing simply from reading. First and foremost, I’m a reader. I absolutely love to read. I always have and I always will. Reading an amazing book that I can’t put down, THAT’S what makes me want to be a writer. That’s what motivates me. I love falling into another person’s world and being submerged in a good book. I love learning lessons from them and the escape they can provide. I want to create the same thing for readers.
When I was younger, I used to talk to myself and play out actual scenarios out loud and in my head. Essentially, I was creating stories and dialogue between myself and other people, even then. But it was my senior year in college (and, no, I was not a writing major. Now, I wish I had been!) that my dream of writing really came to fruition. I wrote my first book—that was almost 11 years ago now—which was awful. But I held onto the dream, even after marriage, and it wasn’t until my son was about a year old that I got serious about writing. That’s when I became determined to make it as a writer. Several drafts of awful novels later, then finally some really good work, here I am!

Gosh, there is so much! First and foremost, be patient! Be patient with the process, with yourself, and don’t rush publishing or getting published. There is time. There will always be time. You don’t want to regret putting something out there that you’re not completely proud of. Second, get an unbiased opinion from a Beta reader for at least your first couple novels (if not, forever) until you’re confidant in your abilities. Getting unbiased feedback can be an amazing tool! Plus, a lot of times, you can find free Beta readers. You can’t beat that!

6. What is your favorite kind of wine?

Maybe you should be asking, what kind of wine don’t I like. Lol. My favorite though would be Chambourcin. I LOVE it! And if I had to pick a specific make, it would be James River Winery, which is near Glen Allen, Virginia. It’s amazing! I pretty much love all wine though. The exception would be really sweet wines.

7. Are you more of an extrovert or an introvert?

Gosh, this is a hard question for me because I feel like I’m an odd combination of both. I can be super outgoing at times and love being around other people, but then extremely quiet at others and am antisocial to an extent. I refuse to choose! Maybe I’m just not that cookie cutter. Lol. I think if you asked people who know me though, they would say I’m an extrovert.

The summer, which to me seems odd since I live in an area where the winter is super dreary, cold, and we get a ton of snow. You would think that would be the ideal time to write since there’s not much else to do, but I find that my mood determines my work ethic and creativity much more than I’d like. In the winter, I get stir crazy and seasonal depressive disorder kicks in, so I work at a much slower speed. In the summer and spring, when it’s warm and beautiful outside, I’m so much happier, and full of energy, thus, I’m much more motivated. Writing comes easier and I’m ten times as productive.
Thank you Paige for letting us get to know you better! Can’t wait for more of your work! 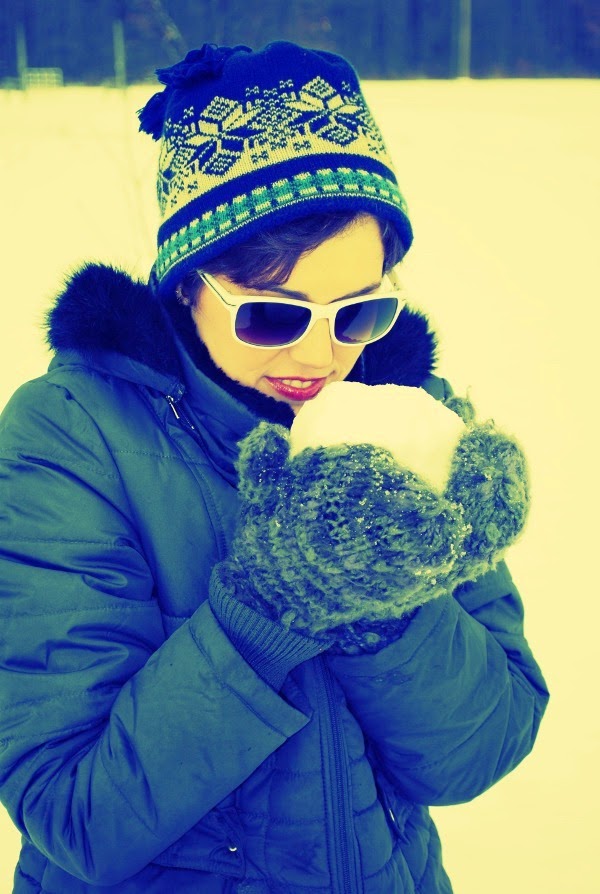 Paige Rion is a contemporary romance author. She’s a mother, wife, blogger, hopeless chocoholic, coffee-addicted, wine-lover. Her debut, novel–a new adult romance–Written On Her Heart, is the first in the Callaway Cove series. She is also the author of the new adult romance serial, Claiming Callie. The fourth and final installment of Claiming Callie is due out in October, followed by the release of the second Callaway Cove novel.
She loves connecting with readers on her blog and social media.

Let’s talk about it. Did you read While It Lasts? Or any other of Paige’s books? What did you think of them? Leave your thoughts in the comments! 🙂

The Girl At Midnight [Review]

The Secrets We Keep [Review]

The Summer After You and Me [Spotlight Blitz & Review/Giveaway]

The Girl from Everywhere [Review]

Once Upon A Kiss [Review]

Written On Her Heart [Review]

How to Love [Review]

0 responses to “While It Lasts [Review & Interview]”