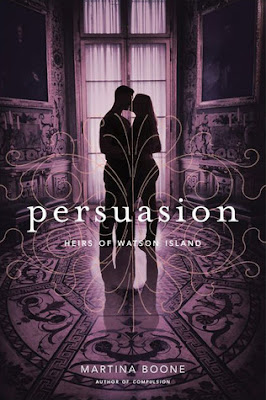 Beautiful Creatures meets Gone with the Wind in the spellbinding second novel in the Heirs of Watson Island trilogy that “skillfully blends rich magic and folklore with adventure, sweeping romance, and hidden treasure” (Publishers Weekly, on Compulsion).

Grieving the death of her godfather and haunted by her cousin Cassie’s betrayal, Barrie returns from a trip to San Francisco to find the Watson plantation under siege. Ghost-hunters hope to glimpse the ancient spirit who sets the river on fire each night, and reporters chase rumors of a stolen shipment of Civil War gold that may be hidden at Colesworth Place. The chaos turns dangerous as Cassie hires a team of archeologists to excavate beneath the mansion ruins. Because more is buried there than treasure.

A stranger filled with magic arrives at Watson’s Landing claiming that the key to the Watson and Beaufort gifts—and the Colesworth curse—also lies beneath the mansion. With a mix of threats and promises, the man convinces Barrie and Cassie to cast a spell there at midnight. But what he conjures may have deadly consequences.

While Barrie struggles to make sense of the escalating peril and her growing feelings for Eight Beaufort, it’s impossible to know whom to trust and what to fight for—Eight or herself. Millions of dollars and the fate of the founding families is at stake. Now Barrie must choose between what she feels deep in her heart and what will keep Watson’s Landing safe in this stunning addition to a series filled with “decadent settings, mysterious magic, and family histories rife with debauchery” (Kirkus Reviews, on Compulsion)
(Goodreads)

Oh my god! I loved the first one! If you haven’t caught my review on Compulsion then you should! And I actually am a lucky one because I am on Martina’s Street Team and I have an early digital copy of this and I’m loving it so far! But I honestly cannot wait until it comes out officially! I’ve already pre-ordered it! 😀 Seriously, if you haven’t checked this series out, then you NEED to! What are you waiting for?!

Let’s talk about it.
Were you lucky enough to get an early copy of Persuasion? What’s your Waiting on Wednesday? Leave your thoughts in the comments! 🙂