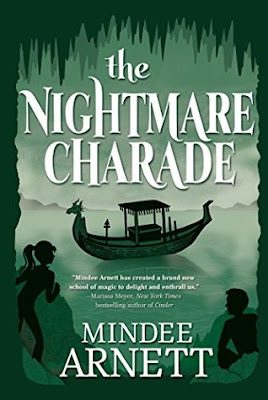 The final installment in a thrilling fantastical mystery series.

Sixteen-year-old Dusty Everhart breaks into houses late at night, but not because she’s a criminal. No, she’s a Nightmare. Literally. Dusty is a magical being who feeds on human dreams.

Being the only Nightmare at Arkwell Academy, a boarding school for magickind, and living in the shadow of her mother’s infamy is hard enough, not to mention the crazy events of the past year. Dusty may have saved the day, but there are many days left in the year, and with an old foe back to seek revenge, she’ll need all her strength to defeat him and save her friends.

I won this book as a Goodreads First Reads. I plan on reading it soon. But I have to read the first 2 books first! Have any of you guys read this series? Is it good?

Let’s talk about it.
Were you lucky enough to get an early copy of The Nightmare Charade? What’s your Waiting on Wednesday? Leave your thoughts in the comments! 🙂