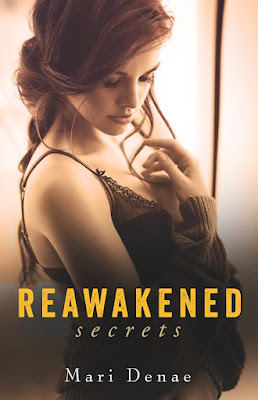 Some secrets should never be kept…

Growing up in the servant’s quarters at Haven Hill, Claire Brown was a poor outcast living in a world of money and privilege. Her only solace was best friend, Alice Sinclair and secret desire, Jackson Montgomery. Rich and connected, they were perfect in every way and perfect for each other.

Still, Claire was foolish enough to fall in love with Jackson, and desperate enough to hide it. When Alice found out, there was a terrible accident that left her in a coma. Jackson disappeared, leaving New Haven without even saying good-bye.

Ten years later, Claire has managed to build a life without them. So when Jackson calls out of nowhere to say Alice is awake, Claire’s first thought is Thank God. Her second? I’m screwed. Lusting after Jackson destroyed her. It’s nothing compared to what she’s hiding now.

But nothing stays hidden forever.

Reawakened Secrets is part one of Jackson and Claire’s story.

Part 2, Reawakened Sins and Part 3, Reawakened Seduction will be released within a few months of each other.
(Goodreads)

My name is Mari Denae I am a married mother of three and publishing my first novel is a dream come true. As the nerd that went to bed with a flash light to read the books I swiped from my mom’s room, I have always been an avid book lover. My favorites are hot, alpha male heroes (think Kristen Ashley), suspenseful, romantic thrillers (think Sandra Brown) and poignant, sweet love stories (think Abbi Glines or Colleen Hoover). My plan was always to be a writer of some sort, but somehow real life responsibilities got in the way. Now, I am an accountant with a night time writing obsession.

One Saturday afternoon, I took my girls to see the latest teenage movie. Four days later, I had read all four Twilight books. I was inspired by the innocent romance and ‘Edward Cullen’ (don’t judge). Once I found my way to Fifty Shades of Grey, I was a complete goner. All my spare time was spent reading, writing or blogging. After version one million, five hundred and fifty five of my series Reawakened , I’m finally ready to share it and hope that someone enjoys reading the story as much as I have enjoyed writing it. This one’s for my mother. I hope she’s looking down proud because I finally finished what I started.