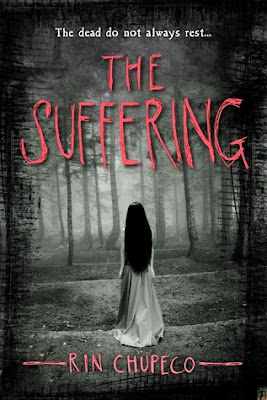 Over the last year I’ve gone against faceless women, disfigured spirits, and grotesque revenants. Some people keep dangerous hobbies; skydiving and driving at monster truck rallies and glacier surfing. Me? I cast my soul into the churning waters of potential damnation and wait for a bite.

It’s been two years since Tark Halloway’s nightmare ended. Free from the evil spirit that haunted him all his life, he now aids the ghostly Okiku and avenges the souls of innocent children by hunting down their murderers. But when Okiku becomes responsible for a death at his high school, Tark begins to wonder if they’re no better than the killers they seek out.

When an old friend disappears in Aokigahara, Japan’s infamous ‘suicide forest’, both must resolve their differences and return to that country of secrets to find her.

Because there is a strange village inside Aokigahara, a village people claim does not exist. A village where strange things lie waiting.

Despite uncanny resemblances to Japanese revenants, Rin Chupeco has always maintained her sense of humor. Raised in Manila, Philippines, she keeps four pets: a dog, two birds, and a husband. She’s been a technical writer and travel blogger, but now makes things up for a living.

Excerpt
It’s still early morning when our group is given clearance to enter. Aokigahara is a deceptive forest. It has all the hallmarks of a popular tourist destination: narrow but well-­maintained hiking trails with a surprising amount of litter, not to mention strips of tape and ribbon wrapped around tree trunks. The leader explains that hikers use them as markers to maintain their bearings. Later on, one of the other volunteers whispers to us that some of the tapes were left by those who came here to kill themselves, in case they decided to change their minds. The revelation horrifies Callie.
A few miles into our hike, anything resembling civilization disappears. Roots crawl across the hard forest floor, and it’s easy to trip if you’re not constantly looking down. We’re outside, but the trees make it feel claustrophobic. They reach hungrily toward the sun, fighting each other for drops of light, and this selfishness grows with the darkness as we move deeper into the woods.
It’s quiet. The silence is broken by the scuffling of feet or snapping of dry twigs as we walk. Every so often, volunteers call back and forth to each other, and rescue dogs exploring the same vicinity that we are will bark. But there are no bird calls, no sounds of scampering squirrels. We’re told that there is very little wildlife in Jukai. Nothing seems to flourish here but trees.
This deep into the woods, any roads and cleared paths are gone. At times, we’re forced to climb to a higher ledge or slide down steep slopes to proceed, and there’s always some root or rock hiding to twist an ankle.
And yet—­the forest is beautiful. I like myself too much to seriously think about suicide, even during my old bouts of depression, but I can understand why people would choose to die here. There is something noble and enduring and magnificent about the forest.
That sense of wonder disappears though, the instant I see them. There are spirits here. And the ghosts mar the peacefulness for me. They hang from branches and loiter at the base of tree trunks. Their eyes are open and their skin is gray, and they watch me as I pass. I don’t know what kind of people they were in life, but they seem faded and insignificant in death.
Okiku watches them but takes no action. These are not the people she hunts. They don’t attack us because they’re not that kind of ghosts. Most of them, I intuit, aren’t violent. The only lives they had ever been capable of taking were their own.
I’m not afraid, despite their bloated faces, contorted from the ropes they use to hang themselves or the overdose of sleeping pills they’ve taken. If anything, I feel lingering sadness. I can sympathize with their helpless anguish. These people took their own lives, hoping to find some meaning in death when they couldn’t find it in life. But there’s nothing here but regret and longing.
And there’s that tickle again, so light it is nearly imperceptible. Something in this forest attracts these deaths. It lures its unhappy victims with its strange siren’s call and then, having taken what it needs, leaves their spirits to rot. A Venus flytrap for human souls.
Something is wrong here, and suddenly, the forest no longer looks as enticing or majestic as when we arrived.