Welcome to my stop on the Waterwitch Babes Presents Truthwitch Blog Tour! The Waterwitch Babes is one of the clans on Susan Dennard’s Truthwitch Street Team. We’ve been hard at work with promoting and supporting Sooz and all the while, making great friendships! Each stop will have a question that we each asked Sooz and at the end the entire interview will be posted on our Tumblr! Today, I am bringing you my experience of what it was like to meet Susan Dennard in person for the first time and an interview of one of Sooz’s besties: Erin Bowman!

What has been your favorite thing that you have come across during research for your books?

On August 4th, 2015, during the #TruthwitchTuesday chat I found out that Susan Dennard was going to be at a bookstore that was only 40 minutes away from me. I had the first two books in the Something Strange & Deadly series signed because I won it in a giveaway. This was my chance to get the third and final book in the series signed and to meet her! I jumped at the chance! I called one of my best friends to see if she wanted to join me (because I hate going anywhere alone) and after work we hauled our asses to Anderson’s Bookshop. 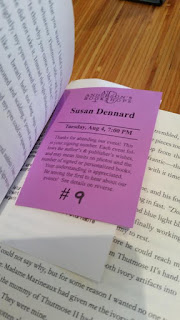 I was ticket number 9 which I thought was so surprising. I thought I was going to be number 60th or something because I had to wait until after work to go. My friend, Laura, and I decided to explore the town a bit before the signing. So we grabbed some dinner and then walked around for a bit.
After that we were able to go into the room where the signing was being held. We chatted up with Sooz and a few other people who were there for about a half hour before the event even started. It was then that my love for Sooz was infinite. She was such a sweetheart, just talking to us like that was amazing. When the event started, she didn’t have anything planned out so she said ask her anything. So we did. Before going to this signing I had known that she is very helpful with other authors/aspiring writers because of her blog and newsletter. I simply enjoyed reading her advice whenever I felt like I couldn’t write a book. So the majority of the questions I had asked were writing related. And it was during this conversation of everyone asking her questions and her answering and she made us laugh so much! I knew then that she was one of my favorite people on the planet. Not only is she sweet and helpful, but she is so funny! 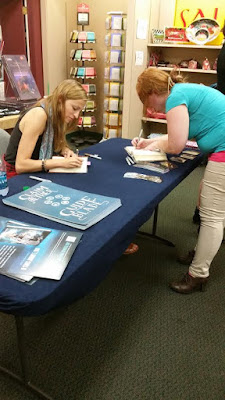 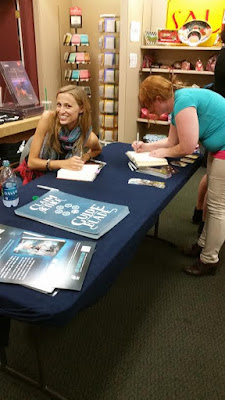 When the signing portion happened, she has a HC of Something Strange & Deadly that she has all of her fans that come out to her signings sign in the book. It’s sort of a keepsake for her and I really love that idea! If I ever become a published author, I will be borrowing that idea! Because I think that it is just so fantastic! 🙂 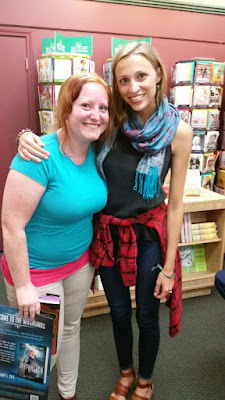 After this meeting, I was so inspired that I immediately went to work on my own writings. One day, I’d love to be just like Sooz. I think she is a remarkable person and such an extraordinary role model! I seriously aspire to be more like her in my every day life. After meeting her, it was like she poked the fire underneath me and I got back into my writing full force. I will always be grateful to her. It was one of the main reasons why I wanted to be on this Street Team of hers. I think it is something truly special that she has so many fans who love her and will support her in EVERYTHING she does. Me included. 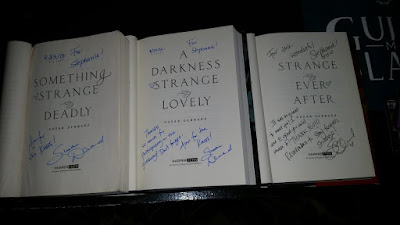 So, THANK YOU Sooz! For letting me be a part of this journey with you and for simply just being amazing! <3

Olivia @ The Candid Cover had a great opportunity to interview Erin Bowman!

Unfortunately, Olivia’s post had already gone live by the time we got the questions, I told her that I could post them so that we could get these awesome questions to you guys! I hope you guys enjoy!

1. Susan Dennard once said that, “one of the most important steps in your writing journey is forming friendships with other writers.” Having witnessed your wonderful relationship with Sooz through social media, how has your friendship influenced your writing?

ERIN: My friendship with Sooz has influenced my life, not just my writing. Sooz is truly one of the kindest, most caring people I know. She’s been there for me through good times and bad, and I am so lucky to call her a friend. Specifically in regards to writing, Sooz has become one of my most trusted critique partners and beta readers. She gives super smart, super insightful feedback, and she’s always willing to hop on Skype and brainstorm with me if I’m really stuck. Lastly, Sooz is a fantastic writer, and I’m always learning from her books. She’s great at making the emotional arcs of her characters mirror the rising stakes of her plot, and I’m constantly trying to improve on that myself through her example.

2. Both you and Susan write fantasy novels for young adults. Have you ever considered co-authoring a book with Susan Dennard or any other writer?

ERIN: I would LOVE to write with Sooz, if the the write story idea presented itself.

3. You recently indicated that you read Susan Dennard’s upcoming novel, Truthwitch, before and after its journey to beoming an ARC. Can you give us a 5 word review of Truthwitch?

4. The Waterwitch Babes are members of the Water Clan. If you could become a character in Truthwitch, which clan would you choose to be in? Why?

ERIN: All that wind control and power of flight that Merrik and Kullen have is pretty bad-ass. I wouldn’t mind being able to fly myself from point A to B… so Air, I guess. 🙂

5. The main character, Kate, in your new young adult novel, Vengeance Road, is a feisty, adventurous tomboy. If she was suddenly thrown out of the wild west and into the world of Truthwitch, which clan can you see Kate fitting into? Would she be seeking vengeance in this world as well?

ERIN: Oh man. I can’t imagine Kate doing very well in the world of Truthwitch. So much would be foreign to her–Witcheries! Ships! SO MUCH WATER. I feel like she’d be most at home in the Earth clan.