It’s summertime in New York City, and aspiring filmmaker Wes Auckerman has just arrived to start his summer term at NYU. While shooting a séance at a psychic’s in the East Village, he meets a mysterious, intoxicatingly beautiful girl named Annie.
As they start spending time together, Wes finds himself falling for her, drawn to her rose-petal lips and her entrancing glow. There’s just something about her that he can’t put his finger on, something faraway and otherworldly that compels him to fall even deeper. Annie’s from the city, and yet she seems just as out of place as Wes feels. Lost in the chaos of the busy city streets, she’s been searching for something—a missing ring. And now Annie is running out of time and needs Wes’s help. As they search together, Annie and Wes uncover secrets lurking around every corner, secrets that will reveal the truth of Annie’s dark past.

Penguin Teen has been doing a #WickedReads campaign and they were kind enough to send me a
book to feature for this campaign. This season is one of my favorites of the year. The fall time is simply the best. You get to read creepy stories, drink lots of pumpkin spice coffee or apple cider, and the leaves start changing color!

Since I will be featuring other books along with The Appearance of Annie Van Sinderen, I’m only going to do a very short mini review of it and then I will post a full length review later on! So, without further adieu, here are some #WickedReads! 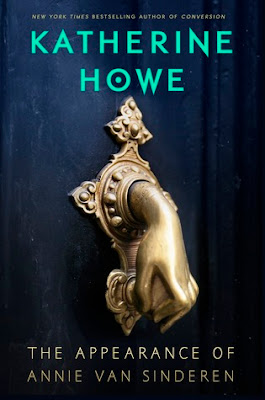 **A copy of this book was provided to me in exchange for my honest thoughts and for this campaign. This in no way affects my actual thoughts on the book itself.**

A haunting, contemporary love story from the New York Times bestselling author of Conversion
It’s summertime in New York City, and aspiring filmmaker Wes Auckerman has just arrived to start his summer term at NYU. While shooting a séance at a psychic’s in the East Village, he meets a mysterious, intoxicatingly beautiful girl named Annie.
As they start spending time together, Wes finds himself falling for her, drawn to her rose petal lips and her entrancing glow. But there’s something about her that he can’t put his finger on that makes him wonder about this intriguing hipster girl from the Village. Why does she use such strange slang? Why does she always seem so reserved and distant? And, most importantly, why does he only seem to run into her on one block near the Bowery? Annie’s hiding something, a dark secret from her past that may be the answer to all of Wes’s questions . . .

I really enjoyed this one! I thought it was a great ghost story! Perfect for this time of year! And look at that cover! It is simple. It is creepy. It is beautiful. It is perfection! Would you want to use that knocker if it was in front of you on a door? I wouldn’t.
This book is broken into three different parts and each part starts at Chapter One. Part one is Wes’s POV, Part two is Annie’s POV, and Part three is a mixture of the two. I can see some people getting confused by all of this but I was fine with it. It didn’t bother me at all.
I was hoping for a bit more of a scary read but this book definitely has its moments and I appreciated that! This book makes me want to read Katherine’s Conversion even more because I really enjoyed her writing style. She is so descriptive and made me really feel like I was in the story!

Need Some More #WickedReads? Check these out!

1. The Accident Season by Moira Fowley-Doyle
2. Blood and Salt by Kim Liggett
3. Nightfall by Jake Halpern and Peter Kujawinski

REMEMBER TO CHECK THIS OUT TOO!

Between the Devil and the Deep Blue Sea [Review]
Teal Trick or Treat: Halloween Blog Hop

Review: Out of Frame by Megan Erickson

Review: The Wrath and The Dawn by Renee Adieh