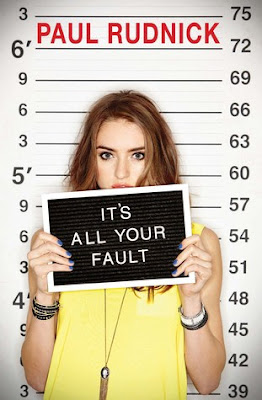 One last chance. One wild weekend.

My name is Caitlin and up until forty-eight hours ago I had never:

Tasted alcohol, kissed a boy, sang in public at the top of my lungs, kidnapped anyone or–WHAT? STOLEN A CONVERTIBLE?

Now I’m in jail and I have no idea what I’m going to tell:

The police, my parents, the mayor, all of those camera crews and everyone on Twitter.

I have just noticed that:

My nose is pierced and I have-WAIT? IS THAT A TATTOO?

I blame one person for this entire insane weekend:

Who is also my former best friend.

Who I have HATED for the past four years.

Where did you get the inspiration for It’s All Your Fault?

A lot of the inspiration came from the amazing world of Young Adult books – I’m fascinated by how passionate readers can be, about their favorite books and characters. I also wanted to write about the largest possible contrast, between an innocent, home-schooled character like Caitlin, and her outrageous, far more sophisticated, Hollywood star cousin, the notorious Heller Harrigan.

Did you have to do much research for this book? If so, what was your favorite piece of research you found?

Much of my research came in the most pleasurable way, from reading a lot of fantasy-oriented YA books, because in It’s All Your Fault, I needed to create a fictional YA trilogy, called Angel Wars. I also researched everything from Buddhist mandalas, which are glorious images made from sand; the Make-A-Wish foundation, which does extraordinary work; and how to order knee socks online.

What is your favorite thing about writing/being a writer?

I love being constantly challenged, which is both exciting and terrifying.

How would you react if you were in Caitlin’s shoes?

I would do just what Caitlin does: hang on tight and enjoy the extremely wild ride.

I write first drafts in longhand on yellow legal pads, while lying on my couch and wearing the most disgustingly comfortable clothing possible. Then I eventually transfer the next many, many drafts to the computer.

What is your favorite drink and/or snack while writing?

At the moment: Mallomars, pecan/caramel turtles, and Hershey’s Kisses with almonds. All of these treats can be combined in a large bowl and declared a salad. 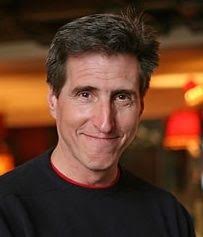 Paul Rudnick is a critically acclaimed novelist, playwright, and screenwriter. His screenplays include In&Out and Addams Family Values, and he’s written for Vogue, Entertainment Weekly, Vanity Fair, and the New Yorker. His plays, including I Hate Hamlet and Jeffrey, have been produced both on and off Broadway and around the world. His first young adult novel, Gorgeous, was called a “wicked good time” by the New York Times Book Review. Under the pen name Libby Gelman-Waxner, he is also the world’s most beloved and irresponsible film critic. Paul lives in New York City. Find him online at http://paulrudnick.com/ and on Twitter @PaulRudnickNY.
Website | Twitter | Goodreads

5 winners will receive a finished copy of IT’S ALL YOUR FAULT, US Only.
a Rafflecopter giveaway

Have you read It’s All Your Fault? Do you want to?