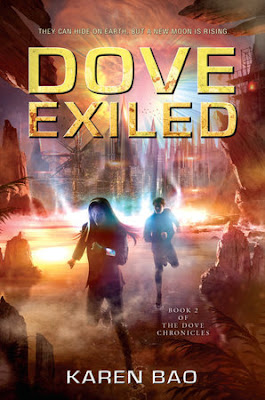 The thrilling follow-up to the groundbreaking debut Dove Arising.

Phaet Theta fled the Moon and has been hiding on Earth with her friend Wes and his family. But Phaet’s past catches up with her when the Lunar Bases attack the community and reveal that Phaet is a fugitive. She’s torn between staying on Earth with Wes—whom she’s just discovered her feelings for—and stowing away on a Moon-bound ship to rescue her siblings from the wrath of the government who killed their mother. But when Phaet makes the agonizing decision to return to the Moon, she finds the rebel movement there has turned her into their “Girl Sage,” a symbol of their struggle. She’s the biggest celebrity on the Moon: half the people worship her, and the other half want her dead.
(Goodreads)

People: the ultimate writing inspiration
Have you ever been people-watching? It may sound creepy, but it’s something I do every day, to the point where it’s a habit. Maybe living in New York City is conducive to such a mindset – or paying attention to others’ idiosyncrasies and character traits is just a part of my personality. Even when I’m having the time of my life at a party, surrounded by my friends, I somehow feel like an observer. People are endlessly interesting to me, and they’re the path by which I learn about the rest of the world. As reductive as it sounds: humanity is my greatest writing inspiration.
Often, ideas come from the people closest to me. For example, Phaet – the protagonist of the Dove Chronicles – resulted from my mother’s stories about growing up in Communist China and the introversion of me and my best friends. What would an intelligent girl living in a totalitarian society act like if she simply wanted the best for her and her family? She’d study all the time, like my mother did, and keep quiet. But is it because she has to, or because she wants to?
Here’s another example: Phaet’s younger brother, Cygnus, was almost a hybrid of my own little brother and one of my closest friends in high school. Larry, my brother, provided not only the computer knowledge that Cygnus has, but also some of his speech patterns. My high school friend unwittingly gave Cygnus his habit of sitting on one foot with the other dangling off a chair as well as his choppy, funny way of saying basic sentences.
Other times, I get inspired by complete strangers. I see such interesting people while riding the subway – acrobats tricking on the poles, fashionistas wearing sky-high pink shoes or neon athleisure wear, businessmen looking stressed, children glued to video games. Manhattan really is just like Humans of New York, the popular blog by Brandon Stanton. Without the endless variety of people here, I’d never have constructed the Earthen city of Battery Bay, with its flying trams, futuristic fashion, and eclectic mannerisms. Sometimes, particularly interesting faces or outfits find their way into important characters.
So, I’ve been inspired by my family and friends and by strangers. What’s left? My “enemies” – or rather, people who’ve given me a hard time in the past. Jupiter and Callisto, who threaten Phaet during Militia training, drew upon on people who bullied me in elementary school. Callisto’s nasty lines about Phaet’s Asian heritage resemble those thrown at me in middle school. Getting made fun of for being Chinese wasn’t fun, but at least it turned out to be useful for something down the road.
My writing process isn’t exactly a solitary one. I need to be out and about, to see people and get inspired by them. Now that I’ll finally be done with college in May, I’ll get to do it all over the world! First stop: Scotland. Next…who knows? 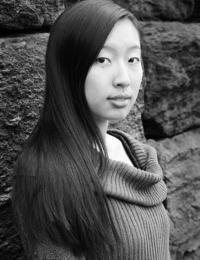 Karen Bao is a writer, musician, and aspiring scientist. She has a brother three years younger than her and a violin sixty years older than her. Born in California and raised in New Jersey, she currently studies environmental biology at college in New York City. Karen began writing Dove Arising at the age of seventeen.

Let’s talk about it!
Did you read Dove Arising or Dove Exiled? Do you want to? What did you think of Karen’s Guest Post? Leave your thoughts in the comments! 🙂